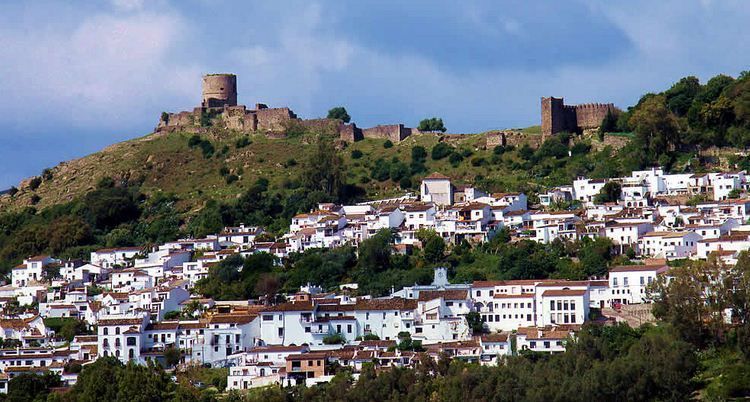 A town whose origins go way back in time, enjoyed a boom during the Moorish period, especially as a frontier town in the Nasrid Kingdom of Granada during the 14th and 15th centuries. The emblematic building in this town – its Moorish castle – was built in that period.  At the back of the castle we find the “Moorish Queen’s Bath”, which is actually a baptismal font from an old Mozarabic church that used to exist there, dug out of the rock. Several dug-out niches have also been recovered nearby, which probably belonged to another humble and ancient Mozarabic church.

Together with the walls and the cistern, known as the “Moorish Queen’s Bath“, it forms a priceless architectural site. Other very attractive elements are the churches of La Misericordia and La Victoria, Los Ángeles Shrine, the Royal Artillery Factory building, the cave paintings in the nearby Laja Alta Cave, and the splendid nature area – the Los Alcornocales Nature Reserve – where the cave can be found.

The remains of the medieval Al-Andalus castle in Jimena de la Frontera stand on San Cristobal Mountains, and used to serve as a watchtower for old borders. Several of the castle-fort’s elements are preserved in quite good condition: stretches of walls that adapt to the topography of the terrain, with their corresponding towers or watchtowers set out in stretches; the so-called Clock Tower, or Albarrán, and the Alcázar, refurbished after being conquered by the Kingdom of Castile, dominated by the circular Keep.

The views over Algeciras Bay and the mountains of Cadiz are breathtaking from here.

Sitting on a spectacular cliff this picturesque town is full of Arab legacy for wich has been declared Property of Cultural Interest. Towers, churches and astonish viewpoints over the Guadalete River. Inhabited since Prehistory, it was the Arabs in the Middle Ages who made Medina Ar-kosch an important defensive strongpoint. Later, its strategic value meant it came to be the capital of a Taifa kingdom.

It past has left an urban pattern of steep, narrow, streets on a rocky promontory with the river winding at its feet. The historic centre, which houses a great wealth of monuments, stretches between the Cuesta de Belén and Puerta Matrona, the only surviving access point from the old Arab wall.

Right in the centre is the Cabildo Square. Some of the most notable buildings in the city are concentrated in this space, such as the Town Hall and the Ducal Castle, a Muslim fortress rebuilt in the 15th century. Opposite those stands the Parador de Turismo, located in the old Casa del Corregidor. Whitewashed walls, grilles and tiles are some of the characteristic features of the building, whose typical Andalusian architecture is perfectly integrated into the houses of Arcos. Before leaving the square, visitors can go to one of the many viewpoints in the area, offering an impressive panorama of the surrounding area.

One of the most characteristic towns in the mountains of Cadiz has been declared Property of Cultural Interest. Lying between the Sierra de Líjar and the Sierra de las Harinas mountains, is set among woody hills and olive fields.

Two buildings stand from a distance out by their height and size: One is the old Arab castle, dating from the same period as stretches of Olvera’s walls and buttresses, and reformed in the Christian period; the other is the splendid neoclassical Encarnación Church. Both make up the classic view of Olvera.

Other sites of undoubted interest are the convent of Caños Santos, the sanctuary of Los Remedios and the Casa de la Cilla building, the current site of the “La Frontera y los Castillos” Museum of Olvera.

One of the most important historical cities of Cadiz. Its historic center has been declared of Property of Cultural Interest and town is famous for having numerous fighting bull ranches.

For it location halfway between the farmland and Grazalema Sierra, Medina Sidonia housed many civilisations, Phoenician, Roman and Muslim. And lived it maximum glory when the Duchy of Medina Sidonia established his residence in town.

It boasts numerous buildings and places of interest, among other: the Roman sewers from the 1st century,  the Roman bridge,  the ruins of the Arab castle of Torrestrella dated on the 13th century and the church of Santa María de la Coronada, from the 15th and 16th centuries, one of the most significant examples of Gothic Architecture in Cadiz.

The only halal certified restaurant in Cadiz is located in Puerto de Santa Maria.