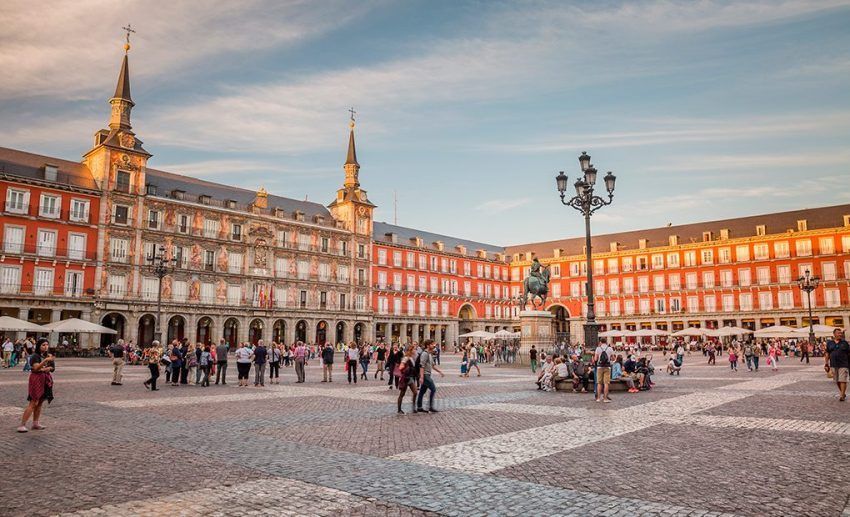 Mageit the Muslims called the new city they  and this name was used until the 13th century when a new word – Madrid – appeared.

In the 9 century, the Umayyad emir Muhammad I seeking to fortify the Central Frontier  an strategically important region  against the northern Christian kingdoms—ordered the construction along the Manzanares River. It was named Majrīṭ, a name that possible derives from the Arabic word “mayra,” a reference to water as sustenance and a giver of life and the Ibero-Roman suffix “-it” meaning place.

The fortress city  of Andalusī Majrīṭ consisted of the Alcazaba and the Al-Mudayna. The Alcazaba was fenced with a wall, with many gates, and included the palace, a mosque and other military and managerial offices. The entire settlement was enclosed by a fortified wall, but small residential settlements (an area known as al-rabaḍ or suburbs) sprung up beyond it and across the river.

The residential area of Majrīṭ was known  as Al-Mudayna that mean “little city” in Arab. The city, with its streets and houses, grew naturally and without planning. This can be seen from the roads which lead from one to another, only to finish in a dead end. Such architecture was common place in medieval times, as can be seen in old Spanish towns, such as Toledo and some parts of Madrid. It can also be seen in the cities of North Africa, for example Fez. The southern part of Almudaina was a crowded residential area surrounded by a wall, some part of it, which extends to 120 m, have been repaired.

Today the center of medieval Majrīṭ corresponds with the current location of the Royal Palace and the Almudena Cathedral, an area that formed the nucleus of the medieval Christian city of Madrid. Indeed the Almudena Cathedral was originally Majrīṭ’s grand mosque, which Alfonso VI ordered reconsecrated as a church following his conquest of the city in 1085.

It was an Arab palace when Madrid was founded. At the beginning was a fort from the outside with a court on the inside, which was expanded in 16 century . Destroyed completely by fire in the next century, a new palace was built on its ruins by the architect Batista who designed it in the style of the Rennaissance.

Situated outside the old Arab wall. It was a cattle and agricultural market during Islamic times and a commercial centre during the Middle Age. After many modifications, the square, nowhas 11 exits, seven arches and a copper statue of King Phillip III. It is the place for national and religious celebrations, surrounded by coffee shops an Madrid crafts stores.

It contains a large collection of Andalusian heritage, mostly from the 9th and 10th centuries. It is made up of pottery of different shapes and uses and decorated with Arabic writings. There are also ivory boxes for jewellery,decorated with human and animal figures.

Built in late 18th century is one of the largest museums in the world. It has works up to the 19th century, such as those of Velázquez, Goya, Rembrandt, Da Vinci, Anglo and others.

Santiago Bernabéu Stadium houses 75,000 fans, has 4 restaurants and the world’s largest sports store. In 2007 UEFA included the Bernabéu in their list of Elite Stadiums. It is a sporting, social, commercial and business benchmark.

Book your Game Tickets or visit the stadium with us joinig our great Bernabéu Stadium Tour. Contact us now!

Founded in 17th century, two buildings added in the 19th century are now the centre of cultural activities like art shows. Beside there is an artificial lake and a Roman monument made of columns and statues.

There are many restaurants and businesses offering Halal food in Madrid.