The Moors from North Africa invaded parts of Spain from 711 AD until the fall of Granada in 1492. With them, they brought along their Islamic religion and culture and ruled Spain for over 700 years. The Moorish influence remains evidently profound in many cities of Spain. Among them, we would like to highlight a few sites that holds great importance to Islamic heritage.

The Alhambra, is derived from the Arabic al-Qalʻat al-Ḥamrā (meaning the Red Castle) in Arabic is a palace and fortress located in Granada Spain. It was originally constructed as a small fortress in AD 889 on the remains of Roman fortifications, and rebuilt in the mid-13th century by Mohammed ben Al-Ahmar, aka Mohammed I of Granada, who built its current palace and walls. It was converted into a royal palace in 1333 by Yusuf I, Sultan of Granada. After the Christian Reconquista in 1492, the site became the Royal Court of Ferdinand and Isabella and the palaces were partially altered in the Renaissance style.

Its architecture and interiors are imprinted with beautiful Arabic scripts and poems. The building is like a book of wisdom constantly communicating to every visitor who wishes to be enlightened.  This 8th century old site has been designated as a UNESCO World Heritage Site in 1984.

To find out about the scripts of Alhambra, have a read of our postings on ´Reading Alhambra´ 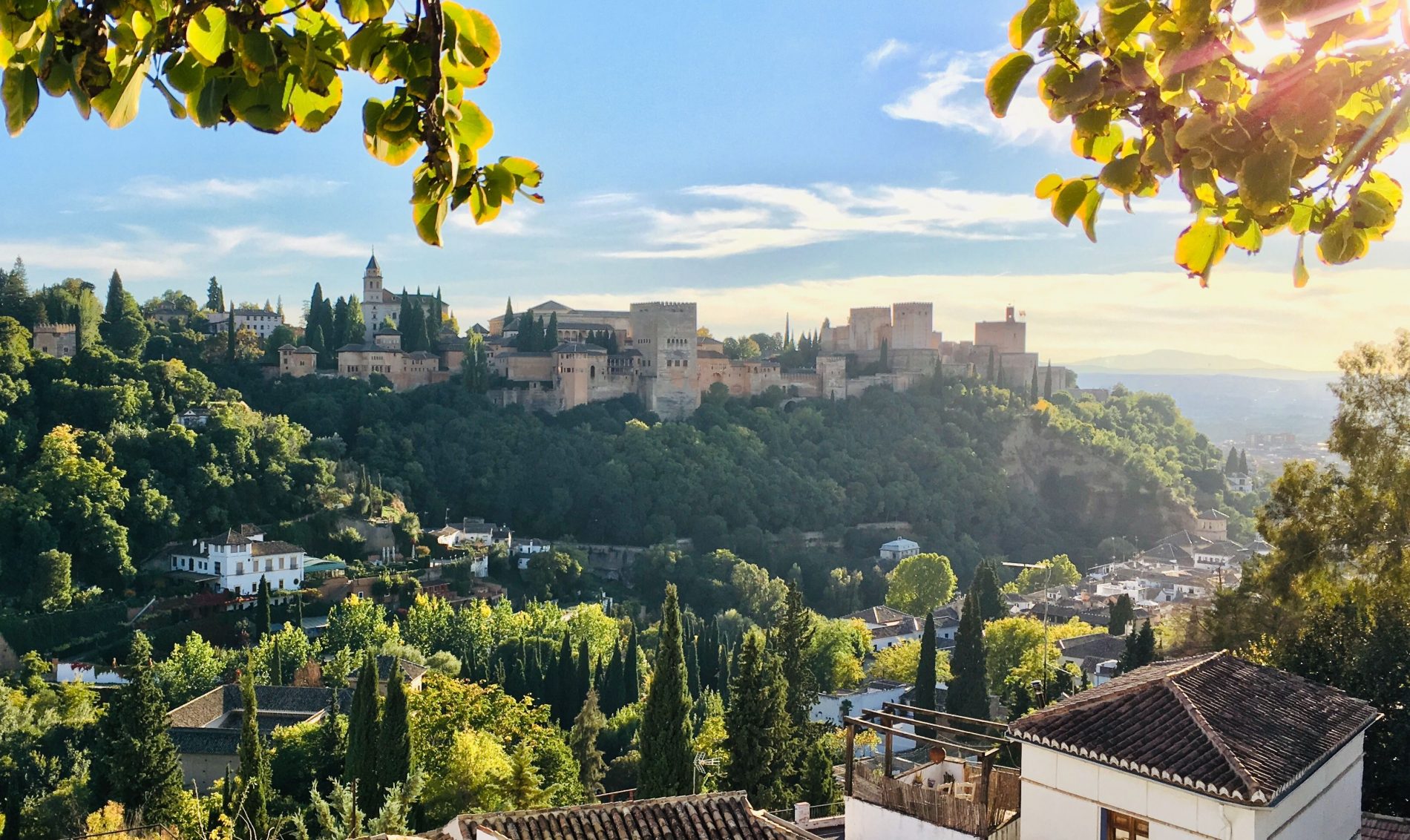 The Great Mosque of Córdoba

The Great Mosque of Córdoba was built in 784 by Abd al-Rahman I, the Cordoba caliphate at the time. The mosque continued its expansion over the years by the caliphs. It held a place of importance amongst the Islamic community of al-Andalus for over three centuries. In Córdoba, the capital, the Mosque was seen as the heart and central focus of the city. During this period, the mosque not only served as a place of worship, but also as a place of sharia courts and lectures.

In 1236, the centre of the mosque was converted into a Catholic cathedral when Christians took over the rule of the city. These days, it is the Mosque-Cathedral of Córdoba and used as a Christian place of worship. It has been enlisted in UNESCO World Heritage Site in 1984.

Royal Alcazar of Serville is a royal palace that was originally a Moorish fort built in the 10th century by the first Caliph of Andalucia and rebuilt by Christian ruler, King Peter of Castile. The architecture style of the palace connects and co-mingles Islamic and Christian influences.

It is still used by the Spanish royal family as their official residence in Seville, making it the oldest royal palace still in use in Europe. It was registered in UNESCO World Heritage Site in 1987.

Medinat Alzahara, or in Arabic ¨Madīnat az-Zahrā¨ (meaning ´the Shining City´) is the ruins of a vast, fortified Moorish medieval palace-city built by Abd-ar-Rahman III (912–961), the first Umayyad Caliph of Córdoba, and located around 7km away from the city of Córdoba. It was constructed as a medieval Moorish city with ceremonial reception halls, mosques, administrative and government offices, gardens, a mint, workshops, barracks, residences and baths.

In 1010, it was destroyed during a civil war, and remained abandoned and buried for centuries until being excavated in the early 1900s. Today, only 10 percent of the complex has been restored. The expansion of the site gives us an idea how powerful the city once stood.

it´s the largest archaeological site in Spain and it is the latest site being listed in UNESCO World Heritage Site (2018).

This Islamic palace was built in the 11th century in the Taifa of Zaragoza, during the intermediate time of independent kingdoms previous to the arrival of the Almoravides.

The oldest construction of the Aljafería is the Troubadour Tower, a defensive structure which date back to the end of the 9th century, in the period governed by the first Banu Tujibi, Muhammad Alanqur, who was named after Muhammad I of Cordoba, independent Emir of Cordoba.

After the reconquest of Zaragoza in 1118, it became the residence of the Christian kings of Aragon. The site is enlisted to UNESCO World Heritage Site in 1986. And, today, it functions as the headquarter of the Regional Parliament of Aragon.

The former minaret that stands at 104.1 m (324ft) in height,  is now the cathedral’s bell tower and visitors can climb to the top by walking up a series of ramps.

It is registered as a World Heritage Site by UNESCO in 1987 along side with the Royal Alcazar of Seville.

Located in Toledo, this 8 m x 8 m small square building, was a former mosque built in 999, one of the ten that existed in the city during the Moorish period. Then, it was known as Mezquita Bab-al-Mardum, derived from the city gate Bab al-Mardum. It is situated in an area of the city once called Medina where wealthy Muslims used to live. The influence of the caliphate can be seen in the brickwork on the facade of the building which resembles those seen at the Cathedral–Mosque of Córdoba.

In 1186, after the reconquista, the mosque was renamed to the Chapel of the Holy Cross (Ermita de la Santa Cruz).

The city itself, is an imperial city (listed in UNESCO in 1986) packed with history consisting of  3 cultures – Christian, Muslim and Jewish influences.  It experienced a long period of ‘convivencia‘ during the Middle Ages, when Christians, Jews and Muslims lived in harmony as you would witness when you walk the streets of Toledo.