Alhambra Palace & Generalife are definitely Granada highlights, keep reading and discover why. The name Alhambra comes from an Arabic root which means “red castle“, perhaps due to the hue of the towers and walls that surround the entire hill which  by sunlight is transformed into gold. But there is another more poetic version, its said that the construction of the Alhambra fortress  was done “by the light of torches”, the reflections of which gave the walls their particular coloration. Created originally for military purposes, the Alhambra was an fortress, a palace and a smal city.

There is no reference to the Alhambra as being a residence of kings until the 13th century even though the fortress had existed since the 9th century. The first kings of Granada, the Zirites, had their castles and palaces on the hill of the Albaicin, and nothing remains of them. The Nasrites were probably the emirs who built the Alhambra, starting in 1238. The founder of the dynasty, Muhammed Al-Ahmar, began with the restoration of the old fortress. His work was completed by his son Muhammed II, whose immediate successors continued with the repairs. 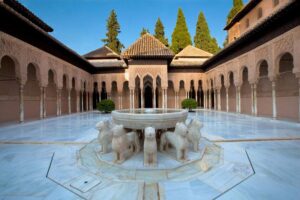 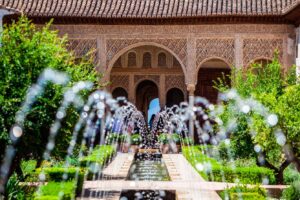 The Alhambra became a Christian court in 1492 when the Catholic Monarchs conquered the city of Granada. Later, various structures were built for prominent civilians also military garrisons, a church and a Franciscan monastery. Emperor Charles V, who spent several months in Granada, began the construction of the palace which bears his name and made some alterations to the interior buildings. These measures were to cause interminable controversy often motivated by political agendas. The remaining Austrian kings did not forget the monument and have left their own more discreet impressions on it. 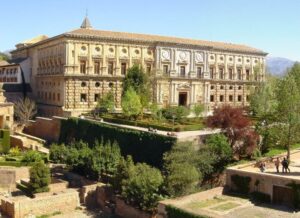 During the 18th century and part of the 19th, the Alhambra fell into neglect and was to see its salons converted into dungheaps and taverns,occupied by thieves and beggars. As the crowning blow, Napoleon’s troops, masters of Granada from 1808 until 1812, were to convert the palaces into barracks. During one retreat they mined the towers and blew up part of them. Two of them, the Torre de Siete Suelos and the Torre de Agua were left in ruins.

It was in 1870 when the Alhambra was declared a national monument. Travellers and romantic artists of all countries had railed against those who scorned the most beautiful of their monuments. Since that date and up to now, the Alhambra, protected, restored, cared for and even improved, has been preserved for the pleasure and admiration of all.The Alhambra became an UNESCO World Heritages site in 1984.

This charming villa overlooking the Alhambra is often said to have been the summer palace of the Sultans, but in fact it was a hunting lodge and country retreat, where the rulers, accompanied by their wives, could escape the turmoil of the palace. They combat the heat by withdrawing into shady, secluded patios and rooms.

The Spanish aristocrats who became its owners after the Reconquest radically altered the appearance of the little palace in the 19th century, adding an upper floor to the buildings at either end of the courtyard, opening the arched windows in the wall overlooking the Alhambra and installing the long rows of fountains which splice together in the air before splashing into the central pond.

In spite of the changes made by the Christians, the Generalife is the most charming corner of the Alhambra, thanks to its gardens and fast-flowing water. In fact, the name of the main courtyard is the  Courtyard of the Water Channel  in reference to the water which coursed through the villa before supplying the Alhambra below.

You need a ticket to visit the Alhambra and Generalife Gardens, ideally pre-booked in advance; each ticket has an allocated entry time for the Nasrid Palaces. The number of admissions per day and hour is limited to protect the monument, and tickets usually sell out before the day.