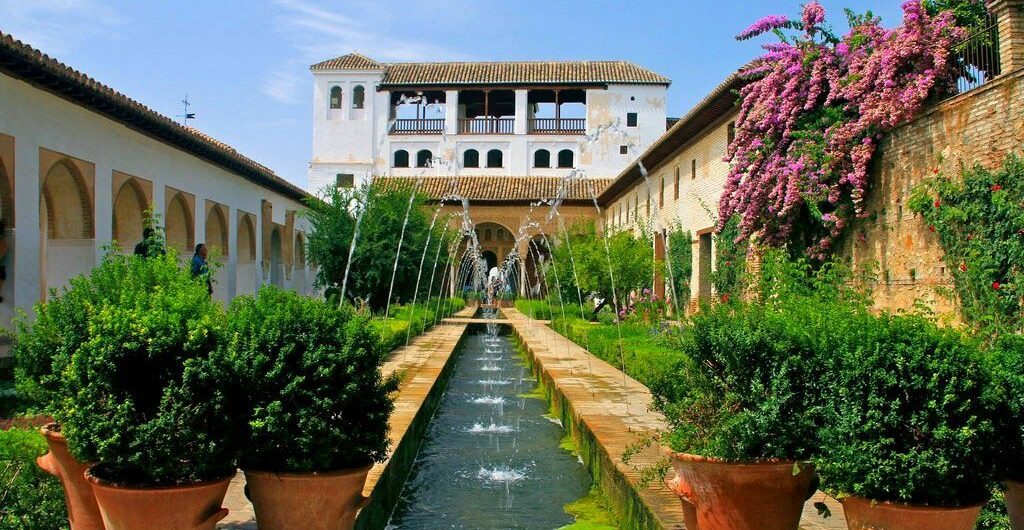 After the fragmentation of the Umayyad Caliphate of Cordoba in the 11th Century the city of Granada began to acquire an increasingly important position on the map of Al Andalus. The Zirid Dynasty established a kingdom in the city, building the Qadima, a fortress protected by defensive walls and glorified by palace buildings in what is today the high part of the Albayzin. With the arrival of the Almoravids and above all the Almohads, the city went from strength to strength. When Al-Ahmar de Arjona proclaimed himself the first King of the Nasrid dynasty in 1238, he turned his attention to the hill opposite known as La Sabika. The Alhambra was born and the Albayzin became a residential district.

Under the Nasrids the Alhambra and the Albayzin enjoyed a period of burgeoning architectural heritage until 1492 when Isabel and Ferdinand conquered Granada. The new rulers decided to develope the city in other directions. The Albayzin was left as the last bastion of the Moriscos, the Muslims who remained in the Iberian Peninsula after the Christian conquest.

Over time the Albayzin underwent dramatic urban development with the widening of its streets, the construction of churches on top of what once were mosques, the arrival of new religious orders and the construction of grand palaces for the local nobility on the bank of the River Darro.

The close links between the Albayzin and the Alhambra show that the designs used in one are often imitated in the other. The Court of Myrtles in the Alhambra is a house of palatial dimensions, which the surviving Moorish houses in the Albayzin reproduce at a smaller, domestic scale. The central courtyard serenaded by the water butt and the gentle murmur of water, the rooms leading off from either side, the hall, the view from the balcony, the privacy, the seclusion are all common concepts in these spaces, regardless of the rank, position or wealth of the owners. This model survives today in the typical Granada house and by extension in the typical Andalusian house and is reflected in the lifestyle of those who dwell within.

From the hill of La Sabika, on which the Alhambra stands, the Albayzin appears as a wash of white houses speckled by the vertical forms of cypress trees and bell towers of churches that once were mosques. From the Albayzin, by contrast, the Alhambra is a thick forest whose trees are crowned by the saffron walls of the Alcazaba, the Nasrid Palaces and their towers.

A Walk Through Islamic History of Al Andalus

The Dobla de Oro propose a path through beautiful streets full of life, from the Alhambra to Albayzin. Immerse yourselve in a unique historical landscape while exploring these 6 great Hispano-Muslim monuments of Granada, all declared World Heritage sites by Unesco.

Dar Al-Horra Palace. Built in the heart of the ziri city as the residence of the sultan wife Aixa, mother of Boabdil, the last nazari king of Granada.

Corral del Carbón. It was the old cereal market and also shelter of merchants. Its located on Reyes Catolicos street in the widening of the christian city.

Bañuelo. The oldest and best preserved Arab baths of Spain is on Paseo de los Tristes.

Zafra House. Located in Bajo Albayzin next to the old hospital today abandoned, and Conception Abbey.

Chapiz House. Find it between the neighbours Albayzin and Sacromonte. Nowadays it houses the School of Arabic Studies.

It includes a night visit to the Nasrid Palaces in the Alhambra and entry to the following monuments: Bañuelo, Casa Morisca Horno de Oro, Dar al-Horra’s Palace, Casa del Chapíz, Casa de Zafra and Corral del Carbón (entry to this last monument is free of charge).