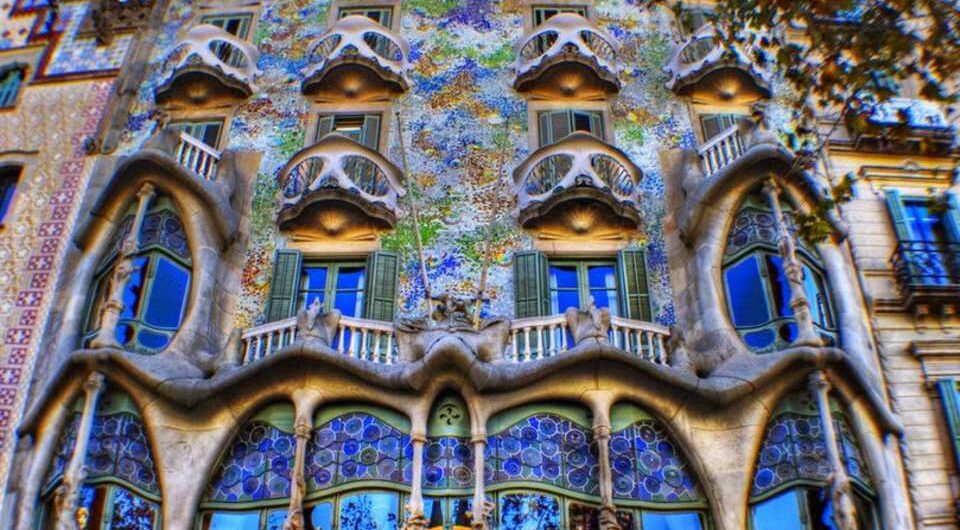 What to see in Barcelona

In the 8th century Muslims conquered Barcelona but their presence lasted less than a hundred years as ‘the Franks’ occupied the city turning it into a military strong post. Still, the Muslim presence in the Catalan region remained for quite some centuries. 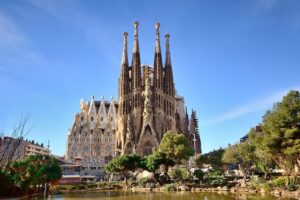 Inspired by medieval cathedrals The Sacred Family Church with three doorways which lead into each of the naves that intersect with the central aisle, it rises up in the middle of Barcelona. In the style of Neo-Gothic the building convers an area of 12,800 square metres.

Although it is true that, at the present time, eight of the 18 towers that were originally planned have been completed –12 of them dedicated to Jesus’s disciples, 4 to the evangelists and 2 to the Virgin Mary and Jesus Christ – when Gaudí died in 1926, only the Tower of Saint Barnaby had been built. 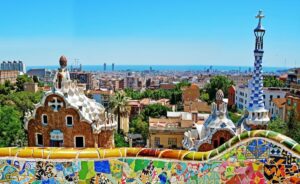 A World Heritage Site represents the Catalan Art Nouveau movement, Modernisme, through one of the key figures in contemporary architecture, Antoni Gaudi.

The park was based on an english garden city concept, and evolved as a luxury development comprising some 60 detached dwellings for families. A group of houses standing above the village of Gràcia, on the so called Muntanya Pelada, or Bald Mountain.

However, the outbreak of the First World War, and the scant interest in the project, turned Güell and Gaudi’s design plan into a commercial failure. What should have been a large scale development was reduced to three plots of land: one for the Trias family, one for the Güell family and another for Gaudi. 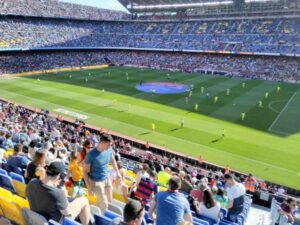 With a capacity of 99,354, it is now the biggest stadium in Europe. In the 1998-99 season, UEFA recognised the services and facilities at Camp Nou by awarding it five star status.  Although it was originally going to go under the official name of ‘Estadi del FC Barcelona’, it soon came to be popularly known as the ‘Camp Nou’ (the ‘new ground’), opened in 1957, as opposed to the club’s old home at Les Corts.

Of the different facilities on offer inside the stadium, of particular note are a chapel next to the changing rooms, the presidential box, the VIPs lounge, the press rooms, several television studios, the Sports Medicine Centre, the Operative Control Unit (UCO), the veteran players area, the FC Barcelona club museum, and the offices of all of the many different Club departments.

Experience watching a game on the Camp Nou Stadium with us!

The course of La Rambla was originally a sewage filled stream bed, usually dry but an important drain for the heavy rainwater flowing from the Collserola hills during spring and autumn. (Rambla, from the Arabic “sand”, is Catalan for “wadi”.) . Its origins as a watercourse are reflected in the paving design, which appears to ripple like water. It separated the walled city on its north-east bank from the settlements of El Raval (“the suburb”) on its south-west.

La Rambla became established as a centre of Barcelona city life, a long wide thoroughfare used for festivals, markets, and sports. Several notable sights are also located within the promenade, including a mosaic by Joan Miró and the Font de Canaletes.Strolling along the Rambla, one can see such historic buildings as the Palace of the Virreina and the famous Liceu Theatre (Liceo in Spanish), in which operas and ballets are staged. The La Boqueria market opens off the Rambla and is one of the city’s foremost tourist landmarks, housing a very diverse selection of goods.

To the north of La Rambla lies Plaça de Catalunya, a large square in central Barcelona. To the east is the Gothic Quarter, the centre of the old city. To the west of is the Raval quarter. Outside the city’s earliest walls, this area was originally the site of various religious and medical institutions. And at the southern end of theis the Christopher Columbus Monument and the Port Vell, the old port of Barcelona, now largely given over to pleasure craft. 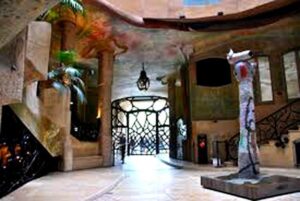 Casa Milà, also know as La Pedrera  (quarry in Catalan) included in the World Heritage list, is one of the most imaginative works Gaudí bequeathed to us. The building located one of Barcelona’s main boulevards, was commissioned from Antoni Gaudí by the Milà family, after he had finished work on the Casa Batlló, which had garnered great acclaim. 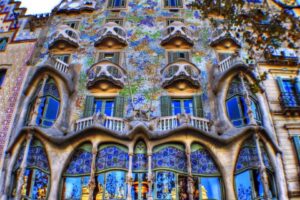 Built between 1904 and 1906 is the most emblematic work of Antonio Gaudi. He replaced the original facade with a new composition full of imagination and joy; made of wavy shape and stone covered with a mosaic of fragments of coloured glass and ceramic discs. The building is full of organic elements and colours and charged with symbolism.

At the top of the facade, the roof is in the shape of an animal’s back with large iridescent scales. The long gallery of the main suite, the Noble Floor, which was the residence of the Batlló family, is composed of wooden-framed windows which are opened and closed by raising and lowering using counterweights.

On the Noble Floor, which was the residence of the Batlló family, Gaudi created a new layout with undulating internal walls, and he decorated the various rooms.

On the level of the ground floor, the Noble Floor and the first floor, the facade includes slender pillars of Montjuic stone which form bone-like shapes and are decorated with typically modernist floral designs.

In a large and cosmopolitan city as Barcelona, that has a growing muslim population and muslim tourist, there are many restaurants and businesses offering Halal food.