Based on a transcript from the documentary: Reading the Alhambra

When you visit the Alhambra, you will enter into the most original and beautiful architectural world of words.

The visual of the semantic prominence of its devout, regal voltive and Quranic phrases and sentences, inscribed in a subtle variety of Kufic and cursive lettering, combined with the images of its mural verse and calligrams, turn it into a magnificent tri-dimentional manuscript which converses with the water, the garden and the landscapes. In viewing the very buildings themselves with a sonorous, vital rhythm of the Arabic language and its poetry.

The walls of the Alhambra are the pages of a book. The similarity between the tiles in many of the rooms and the covers of the books of that time with their artistic tracer in colouring is not mere chance. The tiles protect and act as a foil to the mural texts in the same way that the covers do to the pages of the Koran and other courtly works.

The stucco work itself shares the same decorative motifs and calligraphic forms as contemporary manuscripts. Including the small arches contained within some of the Kufic calligrams. 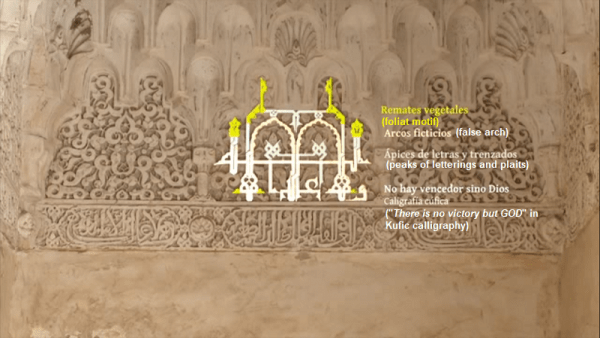 The incorporation of words into the architecture leads to a symbolic transfiguration of the spaces it encloses. Look where you will, and you will find metaphors idealising the figure of the sultan who built them and of the virtues of the palaces themselves. Other metaphors like in parts of the Alhambra to the stars in the firmament, or to gardens, or to heaven, in a similar way to the descriptions of the paradise found in the Qur´an. Yet others in nuptial vein personify its rooms as brides prepared to welcome their Lord. The whole intent is to identify these royals courts as belonging to the Garden of Eden and isolated from the reality outside where decay, chaos, and evil of our mood.

The door to the Mexuar,  the very threhold of the royal palaces is adorned with poetic symbolism in a brief qasidah inscribed in splendid Nazareth cursive lettering.

“Oh sublime royal dais, how marvellous is your design! Openly you went to an overwhelming victory. And good works and action. It is a monument of the imam Muhammad, the shadow of God stopping over all of us.“

The facade to the Palace of Comares addresses the reader in the first person through a poem beneath its majestic wooden eaves.

“My place is that of a crown, my door the brow: in me the West is the envy of the East;
Al-Ghani bi-Llah entrusts me to open hurriedly to the victory that calls;
For I await his appearance, as the horizon welcomes the dawn;
God made his works to resemble in virtue his nature and his countenance!”

The ire to the throne inscribed below this poem is one of the most fervent proclamations of the devine presence to be found in the Qur´an and confers a solemn sanctity upon the palace. 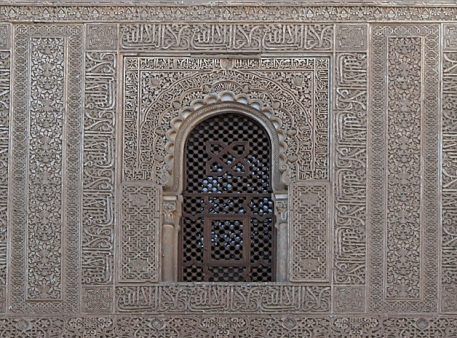 “God! There is no God but He,- the Living, the Self-subsisting, Eternal.
No slumber can seize Him nor sleep. His are all things in the heavens and on earth,
who is there can intercede in His presence except as He permitteth?
He knoweth what(appeareth to His creatures as) befreo or after or behind them.
Nor shall they compass aught of His knowledge except as He willeth.
His Throne doth extend over the heavens and the earth
and He feeleth no fatique in guarding anad preserving them,
for He is the Most High, the Supreme.”

Every wall and columns in Alhambra is communicating with us in verses from Qur´an, poems and proclamations. Through this posting, if you are already aspired by the wisdom that beholds the walls of Alhambra, being physically in the palace, identifying and reading the inscriptions by yourself would be an one-and-a-life-time experience.

In the next chapter, we will see more incriptions of some of the verses from  Qur´an, in the Hall of Partal Palace and the Hall of Comares!

Note: All text and images are from the documentary of ´Reading the Alhambra´ except stated otherwise.