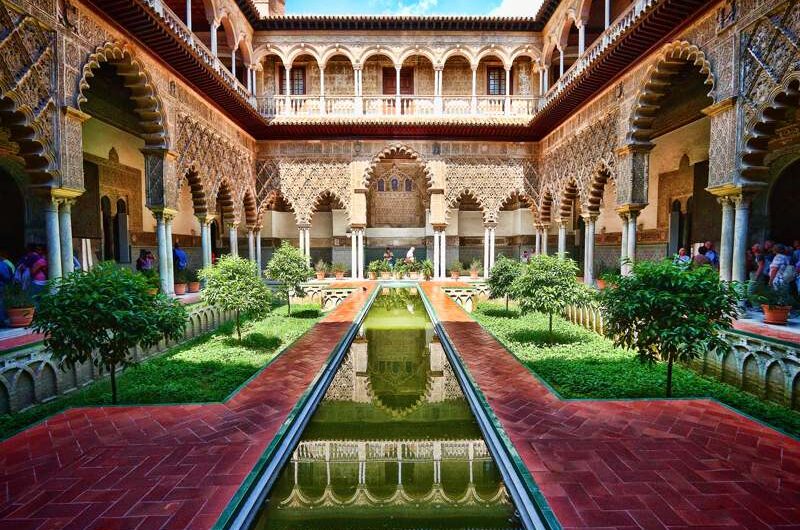 For a Muslim who has some familiarity with Islamic history in the Iberian Peninsula, a visit to Spain is almost like a pilgrimage. In the era of the Golden Age of our civilisation extending from early 8th to late 15thcentury, coincidental with Dark Ages in the rest of Europe, when Al Andalus was the centre of global civilisation. Its capital Cordoba was Europe’s largest city. Greatest Islamic heritage of spain is located here in the south, Andalusia: Granada (Gharnata) and Cordoba (Qurtaba).

When you hear the name Alhambra, somehow the name itself gives you a certain excitement, as the place seems mystical and adventurous. Who would not be in awe of such an amazing place that’s rich in history and culture? The best thing is that it was influenced by various civilizations, especially the Muslim civilization. Just to prove to you how important Alhambra is, I’ll give you a short overview of its history. According to historical documents, in the year 889, Sawwar ben Hemdun needed to seek refuge in a fortress called Alcazaba, which Muslims then had to rebuild due to the struggles that had taken place.

The castle then soon turned into a military fortress due to its strategic position as it overlooked the whole city. When the first King of the Nasrid dynasty administered Cordoba, he then established the royal residence in Alhambra. Yusuf I and Mohamed V are the ones responsible for most of the construction in Alhambra that still remains until today. However, when Cordoba fell into the hands of the Catholics, Charles V wanted to rebuild parts of the castle in his name and therefore built several new areas such as the Emperor’s Chambers and the Queen’s Dressing Room.

There are so many amazing things to see in Alhambra! From the Alcazaba and the palaces, Patio of the Lions, the Justice Gate, the building of the Baths, to the Comares Room and the Hall of the Boat, it will take you 3-4 hours just to finish your tour. Like any other major tourist attraction, visiting Alhambra can be a little overwhelming. If you plan to visit this amazing place during peak hours (like in the Summer), then you will definitely need to plan ahead (some people book the tour and entry tickets 90 days in advance). But if you plan to visit in the winter, then there shouldn’t be a problem.

The Great Mosque of Cordoba is known for its bold architecture and size, as many of the buildings and structures during the Umayyad Caliphate were established to rival those in Constantinople. So can you imagine, how grand it is? It was one of the biggest mosques after the Holy Mosque in Mecca and the Blue Mosque in Istanbul. Its architecture is very different and majestic, which symbolizes Muslims’ power and influence in the West at the time.

Historically, the design and architecture of the Cordoba Mosque is known to be very unique because it symbolizes the unity and harmony that existed between Muslims, Jews and Christians. Initially, Abdul Rahman I purchased half of the Cathedral to enable the Muslim community to perform their prayers. Not long after that, he then purchased the other half to build a new mosque. Later in the 16th century, a cathedral was built right in the middle of the mosque, hence the name ‘Mezquita-Catedral’.

When you visit the Cordoba Mosque, you will notice that there are many distinct and bold arches, also known as the horseshoe arch, which was the first Muslim arch adaption used in the Umayyad Great Mosque of Damascus. Sadly, Alhambra was abandoned in the 18thcentury and it was not until the 19th century when the Government decided to repair and preserve this historical place.

The Cathedral of Seville, or more officially known as Santa Maria de la Sede Cathedral, is known as one of UNESCO’s World Heritage sites.  It was and still is, one of the biggest gothic cathedrals in the world. It was the capital city of the Umayyad Caliphate from the 8th to the 13th centuries. However, when Seville was conquered by the Christians in the 12th century, they decided to use the mosque as a church. They then decided to knock down parts of the church and rebuild it as the church was beginning to decay. There’s a saying that the developers actually had the ambition to build a humongous church to let the future generation believe that “they were mad”.

The area of the whole cathedral is 11,520 m2 so you might want to bring a bottle of water with you when you get there. Also, maybe it’s best that you have a full stomach or at least some snacks in hand just in case you get really hungry. You don’t want to rush your visit to the Cathedral!

If there’s one reason you should visit Alcazar, it’s because it has been recognized as UNESCO’s World Heritage in 1987. Just look at the pictures and you will understand why this site is one of the most visited sites in Seville.

Alcazar was built by Spanish governors in 913 as a fort but when Muslims conquered Spain, they turned it into a palace. As different rulers lived in the castle, many of them also made major changes to the castle, mostly expanding it. The highlight of the castle is its intricate carvings on the stonewalls and the beautiful gardens. Alcazar is still one of the oldest European Royal Palaces that is still in use. If you’re tired of looking at architechture and décor, you can always partake in various activities that are held there, organized by the Royal Alcazar Board of Patronage and the Town Hall.

If you’re into architecture and interior design, then you should definitely check out Palace of Viana (Palacio d Viana). This palace was home to Marquiasate of Villasica, which was built in the 15th century. When you visit this noble home, you’ll be able to see and experience the traditional home of aristocrats. The interior is so exquisite and different, you will feel as though you travelled back in time! Back in the day, many of the elites enjoyed a luxurious lifestyle, which was reflected in their ornaments like tapestries, paintings and porcelains. I always enjoy visiting traditional homes whenever I’m abroad because it really adds something personal to the trip. Also, this site is slightly less crowded than the rest, so it’s a nice change of atmosphere.

The highlights of the palace are the courtyard and garden, which are built in the palace itself—allowing you to have an indoor garden! Gardens have always been an important aspect in every Muslim home, because plants, animals and insects are believed to be a blessing from God and creating a garden within the home reflects the idea that humans should use the environment ethically (this concept also inspired Western architecture and design).

Madinat al Zahra literally means the city of Zahra, which is situated just outside of Cordoba. As a tourist, you’ll be able to visit several amazing places such as the Edificio Basilical Superior, which functioned as offices for many state officers as well as Casa de Yafar, which was also home to the Caliph’s prime minister. The size of the city is huge, built on acres and acres of beautiful land.

Mosque of Christ of the Light

This building is so beguiling right from its name. With its origins having dated back from the 10th century, its one of the classic Moorish monuments to still stand proud today. During the 12th century, it was turned into a Catholic church, but it’s the only mosque out of the ten in Toledo that continues to exist till today. Look out for the Arabic inscription on the south-west end that enlists the history of how the mosque came about. Though the mosque is not as grand as the Cordoba Mosque, this slice of ancient architecture is an interesting amalgam of cultures.The interior may not boasts a majestic front, but the pillars and horseshoe arches form nine different sections, each offering intricate geometrical designs. While many may scratch their heads at the unusual history that derives from this building, it also exhibits the co-existence of two religions.

Originally built by the Moors and later re-instated by King Enrique II in 1369, a third tower was added to the vaulted gate to connect the existing two. Cross through the Roman bridge and head to the tower which houses the Museum on Islamic Spain. Hear the story of Christians, Muslims and Jews living in amicable peace during that reign. The monumental treasure right now was previously used as a defence border from attacks, then a prison and a girls’ school. On top of immersing yourself in the heritage this place offers, the museum preserves artifacts that showcase the lives of three distinct religions through documents and pictures, giving you an inside look into the coexistence that took place before.

Sitting at the foot of the hill, the last remaining fort was ferociously protected by Muslims in the past. There’s also stories unravelling how Emir Muhammad IX locked up his daughters here. Drop by the ancient Muslim Bridge before climbing up the Castillo Arabe to appreciate the bravery of Muslims defending their fort. Take in the view as you tread the ruins of this fort and reminisce the history of the Castillo Arabe, which dated back from the 12th century.